With Strategic Advertising In Place, Business "Ads" Up 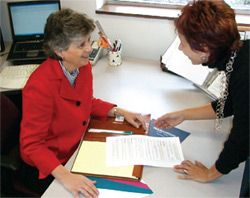 Due to the variety of avenues businesses can pursue when it comes to advertising, including but not limited to graphic design, print material, event marketing, web site development, e-newsletters, direct mail, trade shows, and billboards, strategic planning is critical.

In fact, says Anne Aufiero, communications executive officer of AdAbility in Camp Hill, “having a strategic overall plan makes all the difference.” As stated on AdAbility’s web site, “Ignorance is not bliss.” By learning and sharing information, the firm’s members gain an understanding of consumer behavior and buying habits, as well as business trends and market developments.

Aufiero describes AdAbility as a firm that “specializes in marketing communications for professional service providers and affiliated associations and helps fuel growth through an integrated, strategic approach.”

By integrated, Aufiero means the team “provides all the pieces to the puzzle—advertising, public relations, collateral material, web sites, and whatever else is needed.” In turn, each of those pieces is developed to be fully integrated as part of the cohesive whole; due to the communication within the firm, creating is not performed in a vacuum

With a strategic approach, Aufiero explains that the firm you work with should utilize its writers and creative designers to ask the critical questions of its clients, thereby gaining a firm grasp of their needs, before proceeding with their requests.

For example, if a client wants a brochure, the question should be posed: “What do you hope that the brochure will accomplish?” The answers help to determine if the brochure is the best way to go and, if not, what solution would be better.

Aufiero likens your strategic approach to taking a well-organized road trip with your route—complete with rest stops and side excursions—highlighted on the map, as opposed to the casual traveler who gets behind the wheel and just wanders from place to place with no bona fide destination in mind. That’s fine for the carefree vacationer but, Aufiero says, “not really the best way to grow a business.”

Putting a strategic advertising plan in place helps to determine direction and enables you to track your progress by providing a means to measure and continually evaluate. For example, if you’re increasing sales while reducing profits, it’s essential to your company’s success to be aware of that information so you can make the necessary adjustments.

“Without specific goals and objectives in mind, you can’t measure a program’s effectiveness,” Aufiero says. Neither are you able to define who your customers are nor the best way to reach to them.

As a business, you will increase your credibility in the marketplace by knowing whom you want to reach. By identifying your target audience, you can then make wise choices as to the media you’ll want to utilize. For example, “You wouldn’t want to send press releases about luxurious vacations to a publication that focuses on frugal lifestyles,” says Aufiero.

As ineffective as it’s always been to blanket the general public with news releases, she says that, “in today’s challenging marketplace it’s not enough to get your message out—you must get it out to a very defined, targeted segment of the market in order to make the right choices on where to invest your time and money.”

Nor do you want to be “so narrow in your focus that you ignore opportunities. Focusing all your efforts in just one medium eliminates the opportunity of reaching readers, listeners, and viewers of other types of media who are in your target audience,” says Aufiero.

Today’s online social media, while still under development, provides a vehicle for a good deal of tweeting and twittering, blogging and chatting. However, because online advertising is still in an emerging state, there are many consumers who are not cyber devotees or fully at ease with these social networking tools.

Although consumers may be “more comfortable using the Internet for purchasing and finding reliable information,” Aufiero says, “companies are still struggling with ways to capitalize on that market.”

Additionally, Aufiero says that companies need to be sure they’re doing selected media well enough to reach a saturation level, thus making a greater impact. Advertising must deliver good and timely information, be a solid resource, and be carried out in a consistent campaign.

It can be challenging to deliver consistency in the midst of advertising’s constantly evolving landscape and the subsequent chain reactions triggered by competitors. “You must first decide, “Aufiero says, “how and if you’re going to respond to what others in the marketplace are doing.”

For example, offering retail business hours on Sundays was unheard of 20 years ago, but with the change in Blue Laws and people working more hours, Aufiero points out that today very few retail stores are not open on Sunday. She says that one grocery store had to be the first to offer Sunday hours, and thus the competition had to decide how to react.

The second factor of advertising’s fluid landscape has to do with the changing media habits of consumers. Radio, word of mouth, and face-to-face social networking have given way to a more engaged consumer produced by the digital age. The immediacy of news, citizen journalists, cell phones, and the Internet, along with the 24-hour availability of entertainment choices, creates a greater impetus for creative advertising.

Aufiero points out, for example, the story about the US Airway jet crash-landing into the Hudson River, which appeared on MSNBC before US Airways actually confirmed it had occurred—all because someone on the Staten Island Ferry took a picture with his iPhone and uploaded it to Twitter.

Add to the mix communication devices such as Facebook and YouTube, and you have “unparalleled opportunities for the savvy marketer,” she says.

These applications have made advertising much more interactive and provide ways for businesses to embrace the active consumer. Today’s consumers have numerous opportunities at their fingertips to research, comparison shop, and engage in discussions prior to making their purchases. Also valuable are online surveys, rewards programs, tracking, and analysis.

In the end, says Aufiero, “consumers play a greater role in co-creating a brand because of their capability of shaping and influencing the messages that marketers disseminate.” Because of that, she says that your advertising component needs to understand the impact of those sites and stay on top of both the negative and positive online discussions of potential customers.

Since women as consumers have always been the objective of so much advertising, Aufiero says that “we intuitively understand what’s effective, and in most instances we retain the purchasing power.”

Likewise, as businesswomen, in addition to creating solid, realistic goals for marketing and advertising, she says it’s imperative that we understand the variety of options available. Although it may be wise to enlist the expertise of a marketing communications firm, “you should also have an understanding of the marketplace in order to make informed decisions,” she says.

Therefore, even though everyone is not tweeting or Facebooking, we need to recognize the usefulness of those applications to our respective businesses, so “we can help plan advertising campaigns that reach all of our targeted audiences in as many ways as possible.”