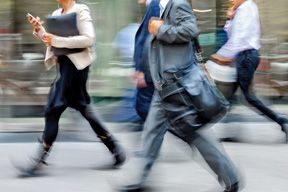 How many steps did you do today? Many of us are obsessed with checking some electronic device that is attached to us to see how far we’ve gone each day. 10,000 steps is the magical goal for fitness, but have you ever wondered where that number came from?

You may be surprised to know that savvy Asian marketers, not exercise physiologists, developed this easy-to-remember baseline. Although pedometers date to the days of Leonardo da Vinci and Thomas Jefferson, the enduring fitness benchmark emerged from the marketing pitch for one of the first pedometers in Japan in the ‘60s. The device, which debuted in 1965, was marketed as “manpo-kei,” which translates to “10,000 steps meter.” Developed after the 1964 Olympics in Tokyo, the product’s name was a number that resonated in Japanese culture and triggered a collective walking craze.

In the 80’s, university researchers troubled by rising obesity rates in the U.S. determined that walking 10,000 steps a day does, indeed, lead to improvements in blood pressure, glucose levels and stroke risk. The 10,000 steps goal, amounting to about five miles a day, is no walk in the park for many Americans however.

Today’s average U.S. adult walks about 5,900 steps daily, according to the Walking Behavior Laboratory at the Pennington Biomedical Research Center in Louisiana. And the Centers for Disease Control and Prevention recommends between 7,000 to 8,000 daily steps.

Still, the 10,000 steps standard endures – a testament to how effective marketing changes behavior.

Indeed, 10,000 steps takes its place among the brilliant pantheon of campaigns that changed America. Remember the “Crying Indian’’ – a commercial showing a Native American by the side of a trash-strewn road, a tear running down his cheek? Launched in 1971 by Keep America Beautiful, the message reduced littering by 88 percent in 38 states.

Among other examples are the “Click it or Ticket’’ ads first launched in North Carolina and credited with increasing seat belt use from 65 to more than 80 percent in the first six months and the “Feel Your Boobies’’ breast cancer awareness campaign. Unilever catapulted sales Axe men’s deodorant and fragrances by playing into the male fantasy of a product that will make them irresistible to women. Axe’s marketing made it OK for men to wear scents and its commercials even got the company noticed by Time magazine

Like these other cultural staples, the 10,000 steps, one-size-fits-all fitness goal is driving consumer demand and illustrating the power of marketing to shape American life. Sales of step-tracking wearable devices are expected to grow from 17.7 million in 2014 to more than 40 million in 2015 alone, according to Gartner, Inc.

Knowing that the “steps” phrase is a sales pitch and not science, free yourself from the tyranny of the 10,000 steps and concentrate instead on making every move count.